The Psychology of Management: Taking the long view 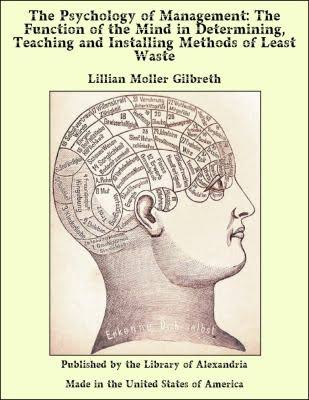 I am quite interested in the psychology of management because I think we tend to adopt psychological models of how management works, and how change happens, without necessarily questioning their assumptions and continued validity, or applicability.  I also find that psychology has moved on, whereas management thinking is less quick to react.  As managers, when that happens, we are in danger of falling behind.

So, I was intrigued to find a book called “The Psychology of management.”

Now, if I told you that there was a book called:

“The Psychology of Management: The Function of the Mind in Determining, Teaching, and Installing Methods of Least Waste”

you might think that, despite its long title that it is about lean management techniques and the psychology that goes behind it.  Also that it was probably written in the last 10 years or so.

The Psychology of Management, from the Gutenberg Project

What would you think if I told you that the book was published in 1914.  Yes over100 years ago, Lillian Gilbreth was writing about the psychology of management.  It is about “the effect of the mind that is directing work upon that work which is directed, and the effect of this undirected and directed work upon the mind of the worker.”

By the way this book is so old that copyright has expired. You can read the entire book in the Gutenberg project.  However, let me save you some time.

A female management thinker, 100 years ago

First lets is not miss something important here.  This is a book by a female management thinker writing over 100 years ago. Even today I get asked, “Where are the female management authors?”.  There are a few, but nowhere near as many as there are men.  So let us not miss the importance of her writing, in 1914, and doing a PhD, even before the women had the vote in the UK (1918) and the US (1920).

Positioning “The psychology of management” 100 years ago

Galbraith starts by explaining that at the time they were at a third generation of management.  A contemporary book review says that the book is a reaction to what was then called scientific management.   Gilbreth says,

“We may divide all management into three types —(1) Traditional  (2) Transitory (3) Scientific, or measured functional.”

Interestingly she says “Traditional management” is also known as “Military,” “Driver,” the “Marquis of Queensberry type,” and “Initiative and Incentive Management”.

In describing the third type “Scientific or measured functional management” she says,

So here we are firmly in the era of Taylor’s theory of management, so well-known to MBA and others who have studied management, the world over.  I love the idea that she described Taylor’s work as “Ultimate management”.  Thank goodness no one has claimed that as a book title and approach, today.

What I find amusing here is not the progression, but that so many management books today start by positioning their work as being a new generation of thinking beyond the previous generation of generations.  Just take a look at Management 2.0, web 3.0, or any other movement seeking to position itself in front of  “whatever topic 4.0”.

We look at management today, with a relatively short time frame to the lens.  Even modern inventions like strategic planning (the mid 60’s) seem like permanently established ways of doing things.  On the basis of this book, I suspect we are nearer Management 9.0 or 12.0 rather than the Management 2.0 that is a current trend.

Let us look at some of the topics in the book.

Here we are, in the early days of scientific management looking at the efficiency of workers and trying to make their tasks as efficient and effective as possible, interestingly with a human touch.  I must admit I have studied this period in my MBA and missed the human touch side.  It was not apparent in the literature I saw, and really only comes out (in the way it is taught) with Hawthorn effect. An observation that occurred in the 1920s, but was only really documented and came to popular management culture in 1950.

Even though I joked about the book and lean management, I am sure that students of lean thinking would find things to think about and compare in this book, especially in the chapters on functionality, standardisation and teaching.

The demand for measurement

We think of the phrase “What gets measured gets managed” as a modern truism.  However here is scientific management being combined with measurement from psychology, which she defined as:

“Measurement has always been of importance in psychology; but it is only with the development of experimental psychology and its special apparatus, that methods of accurate measurements are available which make possible the measurement of extremely short periods of time, or measurements “quick as thought,” These enable us to measure the variations of different workers as to their abilities and their mental and physical fatigue; to study mental processes at different stages of mental and physical growth; to compare different people under the same conditions, and the same person under different conditions; to determine the personal coefficient of different workers, specialists and foremen, and to formulate resultant standards. As in all other branches of science, the progress comes with the development of measurement.”

Now did you read that.  Measurement “as quick as thought”,  “…studying mental processes”, and “measurement of mental and physical growth”.  These concepts would not be out of place in any modern management paper, any balanced scorecard design or any modern systematic management tool.  As she says, “As in all other branches of science, the progress comes with the development of measurement”.

Today we would write such an article as “The psychology of management around evidence based decisions.”

The challenge of incentives and rewards

What is also here is that thorny question of incentives and rewards and the effect on performance.  Modern psychology now makes a clear distinction between the effect of rewards on different types of task.  There is evidence that reward actually constricts tasks where creativity is required making them less effective.  Chapter nine of the Psychology of Management is about incentives and how they affect behaviour.  I particularly like the definition of an incentive as

“that which moves the mind or stirs the passions; that which incites or tends to incite to action”

Oh, that managers, and HR practitioners, today thought of incentives as needing to “Stir the passions” or “Moving the mind”, rather than merely being money bonuses and a stick.

I suspect many people think that the comparison between sport and management is a modern phenomenon.  Think again.  In chapter 2, she even compares this “Ultimate” management to “Athletic contests” and makes the comparison with baseball teams and coaches.  So, even 100 years ago, managers were looking to “sporting prowess”, “team spirit”  and the role of the individual within the team.  So little has changed.

Even 100 years ago, there was consideration of how the mind and body of the worker affect one another.  Chapter 2 is entitled “Individuality” and looks at the role and psychology of the individual worker.

She says, “Under Transitory Management the physical and mental welfare are provided for more systematically.”  “Scientific Management realizes that the condition of the body affects every possible mental process.”.

She also points out that, as many of you will be aware, that even under traditional management there were philanthropic owners who cared for their worker well being, such as Joseph Rowntree, Cadbury, and others.   Of course there are still philanthropists today.

I was delighted to see that one chapter plays to a phrase I use a lot.  We need both analysis AND synthesis.

Analysis is dividing things up.  Syntheses is putting things together and looking at the whole.

In management, we tend to do analysis, which divides things up. If taken to excess, analysis and division creates silos and isolated narrow views.

In contrast we do much less synthesis, that is putting it back together and considering it as a whole system.  So to find a chapter heading on “Analysis and synthesis” was a delight.

However it is clear the focus is to produce uniformity of processes, that have been though through.  A more modern view would be to look at the whole system of the organisation and the organisation in its wider environmental, social and cultural context.

Reminding us how technology has changes: we have always needed to adapt

It is hard to forget when reading this, despite the analogies with the present, that this was written 100 years ago.  One particular paragraph brought it to life which described using a dictaphone as a tool of learning.  I quote:

“For example, — learning to dictate to a dictaphone. The writer found it very difficult, at first, to dictate into the dictaphone,— the whirling of the cylinder distracted the eye, the buzzing of the motor distracted the ear, the rubber tube leading to the mouth-piece was constantly reminding the touch that something new was being attempted. At the suggestion of one well versed in Scientific Management, the mouth-piece of the dictaphone was propped on the desk telephone on a level with the mouth-piece of the latter. The writer then found that as soon as one became interested in the dictating and one’s attention was concentrated on the thought, one was able absolutely to forget the new variable, because it is one which is kept constant, and to dictate fluently. The emphasis laid on the likeness in thus dictating to the old accustomed act of talking through the telephone, seemed to put all other differences into the background, and to allow of forming the new and desired habit very quickly.”

What an elegant description.  Can you not just smell and feel the rubber of that pipe?  Imagine how your concentration is initially diverted by the technology,  just as with the small keyboard on a smartphone.

Let us be clear here, this was published in 1914, and was written before then.  This was over 100 years ago.

The Psychology of Management is curiously arcane, and modern, at the same time

What is most fascinating about this book is how it is both arcane and modern, at the same time.  Strip away the context of management 100 years ago, and look at the principles  that are espoused and the underlying thinking.  Here are many of the ideas of modern management, issues that we discuss today, being thought about in a completely different context, 100 years ago.

Yes, of course, we have progressed dramatically since then in many ways.  However, here is an example of how a progressive thinker was looking at the psychology of management 100 years ago.  A thinker that actually sheds some light on how we could think about it today.  If nothing else, it is an intriguing historical document on management thinking and psychology.

Project Gutenberg’s The Psychology of Management, by L. M. Gilbreth, http://www.gutenberg.org/files/16256/16256-h/16256-h.htm
The Hawtorn effect, coined in 1950 by Henry A. Landsberger when analysing older experiments from 1924–1932 at the Hawthorne Works  http://en.wikipedia.org/wiki/Hawthorne_effect