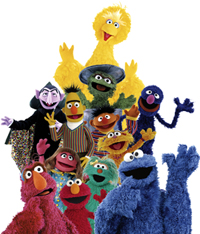 To understand the Balanced Scorecard you have to understand where the originators were coming from.

You will find that it was not simply Dr David Norton and Prof Bob Kaplan that developed the approach, but that there was an important other influence from an unlikely source: Sesame Street.

Where the originators of the Balanced Scorecard were coming from: The Sesame Street Connection

To understand any approach it is vital to understand where the originators were coming from. Back in 1992/3 Norton & Kaplan came together.

Professor Bob Kaplan was at Harvard Business School specialising in Finance. His concern was with organisational value. The valuation of most businesses based on assets alone completely missed the value that the management and organisation added. In fact most company valuations were perhaps ten times the asset value. Clearly there was a need to evaluate the other elements that drove value and performance.

David Norton came from a background of engineering and IT. He ran various consultancies (Nolan Norton, which later became a part of KPMG Consulting). He was interested in strategy and its execution.

Together these two researched methods for measuring strategy and organisational value. They came across Art Schneiderman in Analog Devices who was using four perspectives in a cause and effect relationship to describe strategy, measure performance in a more balanced way, and manage the implementation of the strategy. Thus the concept of the Balanced Scorecard as a tool of strategy execution was born.

But to fully understand the balanced scorecard’s origins you need to know some of the other players they involved when they formed Renaissance Worldwide to deliver balanced scorecard consultancy. They involved two others: Harry Lasker and Dave Lubin. Lubin was an internet technology specialist and brought the capability to implement strategy quickly.

Sesame Street was noted for its innovative approach to teaching young children. Each programme was carefully tested on the audience and if any lost interest for a minute, the scenes were re-cut and re-tested. Harry Lasker came from Harvard and specialised in cogitative learning processes. When he joined the Balanced Scorecard team he brought the ideas of cognitive learning processes to organisational learning. More importantly the fourth perspective was called “Learning and growth” to reflect this aspect of their thinking.

Lasker’s role is really important. So often you will find practitioners renaming the fourth perspective, “People” or something similar. When they do this they take away an important principle of Balanced Scorecards: That it is about how organisations learn and grow and develop. If you rename the perspective with a title that takes away the emphasis on learning, the effect is that the approach becomes more static and operational. (See the video for more about Lasker’s contribution.)

Keep the perspective as “Learning and growth” and you invite the organisation to ask, “What do we need to learn and grow and develop as an organisation to be more successful and deliver our strategy?”

This question changes the whole nature of a balanced scorecard project, its approach and its potential value.  It shifts the whole approach from measuring and controlling anorganisation, to the challenge of being a strategic learning organisation.